Two hour walking or car tours of a battlefield or site of military heritage are available for a minimum fee of £70. Ideal for birthday, anniversary or treat for a loved one with an interest in history.

The tours focus on the archaeology of the sites, the historic environment and the stories of those involved, in addition to a narrative of events. Emphasis is placed on enjoyment and understanding and can be tailored for those with a passing or specialist interest.

The visits can be either undertaken on foot, by car or both options are available in some cases. They last two hours and bespoke arrangements can be made. Tours by vehicle enable access for everyone.

Two tours are possible in one day with lunch (not provided) at the Castle Inn, between two tours, entirely possible. Maps and information sheets are provided as part of the fee. Groups of up to twenty people per group can be catered for and there is a minimum fee of £70.

Do get in touch to find out more about my partnership with the Castle Inn, Edgehill.  A guided tour of the Edgehill battlefield is possible with lunch. Ideal for societies and like minded groups of friends. 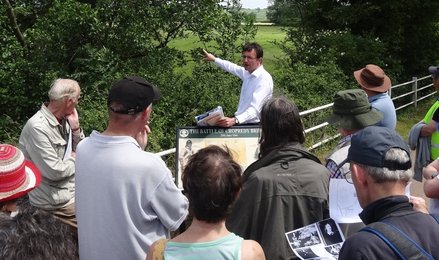 Cropredy Bridge is Oxfordshire's largest battlefield and when fought in June 1644 its outcome was to have significance of the Civil War.  Why not come and find out what happened when King Charles I fought Sir William Waller on what is still an unspoiled field. Just north of Banbury, off the M40, the village of Cropredy has two lovely pubs which offer lunchtime and evening meals.

This tour examines Oxford's role as Royalist capital through the eyes of some of the people who were present, assesses the impact of the war on the city and surrounding area and highlights what remains to this day. Access to the university colleges will give insights into the impact on people and the tour includes a guided visit to the Ashmolean Museum.

Edgehill, just north of Banbury, not far from the M40, was the first battle of the Civil War. The tour highlights the political and military context, yet includes too a significant number of personal stories, anecdotes and legacies relating to those caught up in the actions. Enjoy a wonderful meal at the Castle Inn, reputedly the site where Charles I raised the Royalist standard before the battle.

The most significant battle of the Civil Wars and arguablly in British history! The tour explains the political and military context, yet includes too a significant number of personal stories, anecdotes and legacies relating to those caught up in the actions. The great names of the Civil Wars are here: Charles, Rupert, Faorfax and Cromwell amongst them. The tour investigates recent archaelogical developments which have transformed our understading of the battle.

Follow in the footsteps of Siegfried Sassoon and Robert Graves to explore many places associated with the Great War. Find out about the impact of the Third Southern General hospital; the burning of the Kaiser's effigy and the growing moral panic in the city in 1916. The tour explains how the colleges were inundated by recruitment and influxes of soldiers in 1914, the experiences of Indian airmen and Belgian refugees and the ways that the lives or ordinary people were affected by rationing and the increasing demands of the war.

Do contact me to find out more, for an up-todate CV, or for any clarifications.